What would Bernard Venables say? 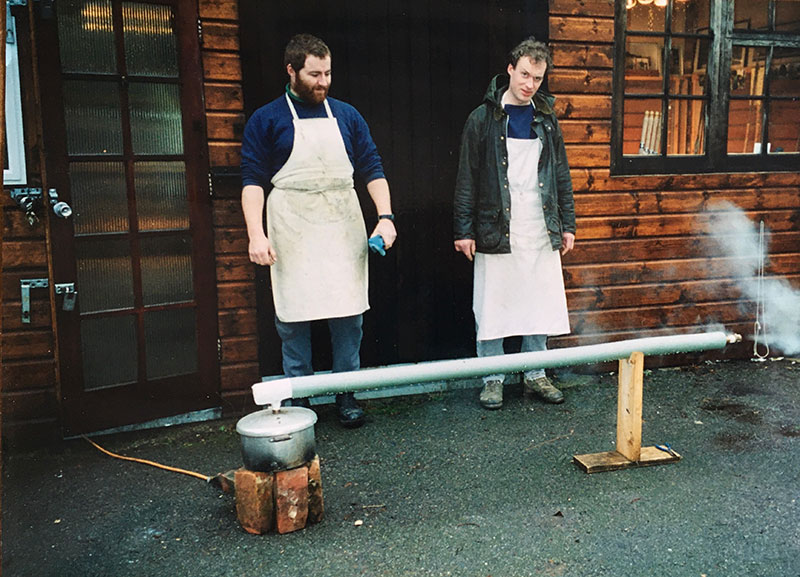 You’ll have seen pictures of our workshop in previous emails. Nicely painted. Sort of light grey. Sometimes two old boys pottering about outside with bamboo.

Here’s the same workshop in the days of creosote. ‘Oh, so it used to be used for something else?’ No. That’s us, when we had hair and loads of muscles and in Colin’s case a fine beard. Like the aprons? Practical, Masonic and slightly sinister. What is that thing? See the steam coming out from the end of that lagged pipe. What’s that on top of the brick Stonehenge -is that a pressure cooker? Yes it is. And behind the bricks -see those flames? They’re coming from a blowtorch called a Cyclone Burner. Notice the gas pipe leading to the front door.

I tell you what, we didn’t have any trouble in those days with the Health & Safety Executive. A few people saw us operating this device. There are some who believe that we had a sideline steaming eels. At least one visitor was persuaded that we cooked snakes for the Asian market in Reading. Perhaps we did. 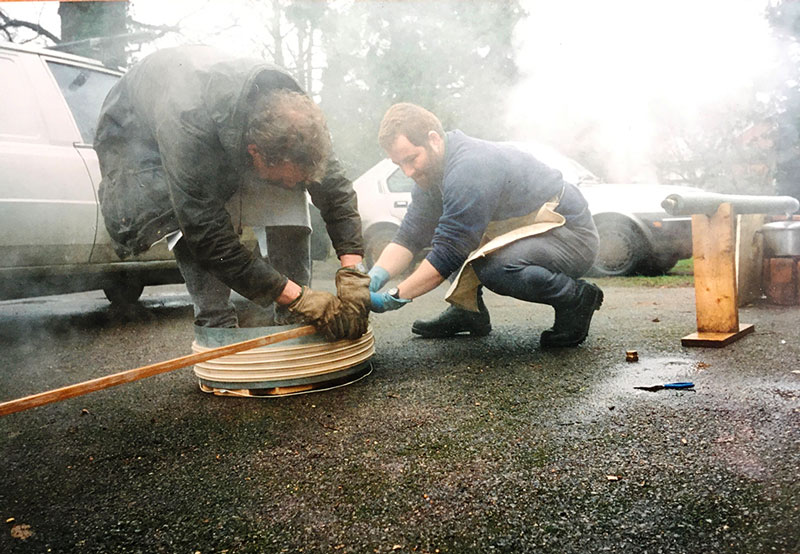 Steam, energy, the ingenuity of the English craftsman. This could be a painting by Turner of something Brunel invented. Five 6′ long steamed strips of ash would fit onto the former you see here. As I worked the strips round, my bottom would momentarily point directly at Colin. I was under great strain as I quickly got the ash onto its former before it cooled. No wonder Colin looked nervous as he clung on to the strip, working on its retaining cord with burning fingers.

This is how the Bernard Venables landing net was made -several hundred of them in about a decade. 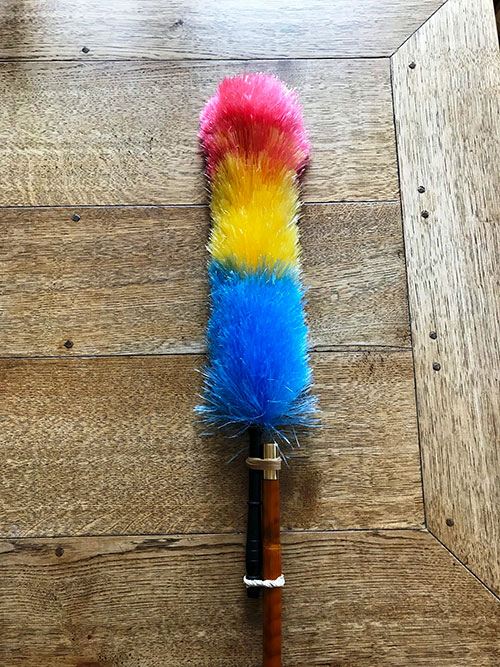 They’re very sought after now, these nets. We made them with super flame-toned Tonkin bamboo handles. The super-deluxe ones were two-piece, 7′ or 8′ long. I don’t think Bernard envisaged a net handle bearing his name with a dusting brush lashed on to it, but I’m sure he’d have approved.

What to do in the closed season. 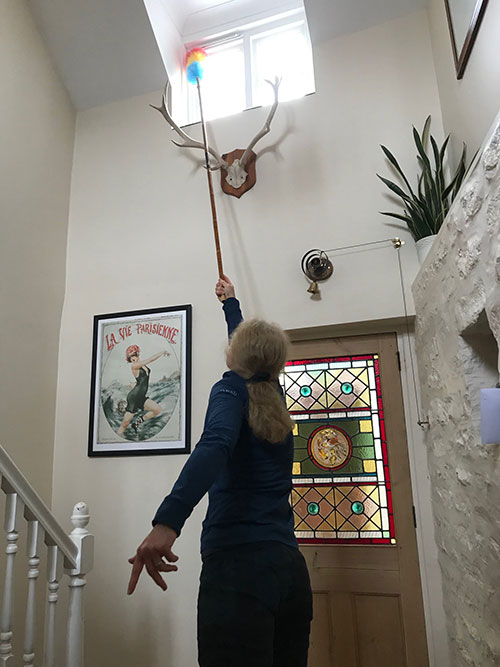 You could be fishing for trout somewhere I suppose, or coarse fishing if you approve of doing so after the 14th of March, but most of you will be thinking about the spring clean after a fusty winter. My trusting friend Nick has generously allowed his wife to use the 7′ Bernard Venables net handle to make sure she doesn’t miss any cobwebs.

We don’t make dusters or Bernard Venables landing nets at the moment, but we are working very hard on the rods you’ve ordered and we will, from next week, be offering you the superb № 30 Venables net from 1996, a Hardy № 1 Wallis Avon (irresistible) a leash of outstanding Constable Wallop Brook fly rods, a MK I Chris Yates Barbus Maximus (super-deluxe) a Kennet Perfection (very superior) and a brand new exhibition grade Richard Walker MK IV carp rod. There will be 3-piece #4-weight 7′ & 8’6″ as new unused Barder fly rods in their leather cases too. I’m hiring security to keep the crowds under control when these turn up.

Please don’t hesitate to get in touch if you’d like to discuss dusting, fine fishing tackle or making an appointment from the 12th of April, when we will be re-opening to visitors.